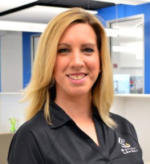 The President’s Award is given at the National President’s discretion to an individual the President wants to recognize, and is someone who has helped the president with his or her accomplishments during the year.  It has been awarded almost every year since 1978. Michael Hurtt, PE, ASHE National President, presented the award during a virtual meeting in May and noted Amanda’s ‘exceptional efforts.’

Amanda has served as ASHE National’s PR Chair since 2014 and was awarded to recognize her accomplishments of increasing brand exposure and furthering the mission of the organization on a National scale. Throughout the past year, her efforts have increased social media interaction by 38%, increased collaborations between Sections and National levels, and provided instrumental digital and print materials to highlight the organization, charter new Sections, and bring value to membership.